In marketing, a spillover effect is a phenomenon where one piece of content indirectly impacts another piece of your company marketing.

In a spillover effect, this influence typically exists between two types of content that are not directly related. It often arises as an unintentional occurrence. It is an effect which lies in the psychology of customers and their spending habits. Unlike other types of digital analytics, it is a trend which is difficult to trace accurately.

The term spillover effect is also used within other disciplines, such as economics, international relations and sociology. The use of technology in marketing is a key representative of this social theory.

Examples of the spillover effect

When one is producing marketing content for a company - particularly if the marketing strategy encompasses a number of different platforms, channels and media types - creating a spillover effect is not an uncommon occurrence.

This is because multichannel marketing covers a wide variety of platforms. As you attempt to reach your target market through a platform, the piece of marketing content that the customer sees will shape their impression of your brand.

In addition, customers are often brought to your company site through a different channel, such as your social media platform, an online advertisement, or through a targeted marketing email. As a result of this, their impression of your website will have inevitably been shaped by other pieces of content.

The spillover effect can encompass a wide variety of different phenomena. Marketers can use the principles of the economics theory and apply it to their content. This includes, for example, a customer assuming that your brand is affordable after having seen the offers that were featured on your online advertisement. They would then view your website through this pre-existing perception.

Social media is a great way to create positive spillover effects for your business. In the image below, you can see an example of this, in a post taken from Google’s Instagram page. 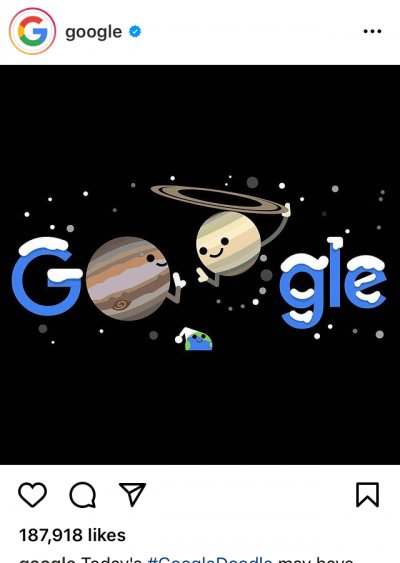 Above, you can see an example of a social media post which has been designed to create a positive spillover effect amongst Google’s audience. It uses the #GoogleDoodle hashtag to draw attention to the creative side of Google. In addition, by using the post to cover a scientific event, it further reiterates Google’s position as a source of reliable information.

This example demonstrates how creating a spillover effect is a key part of the way in which your company’s branding and reputation is established. This is why it is so important that your marketing is consistent and on-brand across all of your channels.

Negative instances of the spillover effect

A common example of a negative instance of the spillover effect is pop-up ads. If a customer saw a retargeting advert for your company regularly popping up on other websites that they had visited, they may feel as though they are being pestered by the advert. This may then, inadvertently, create a negative impression of your brand.

If they were then to visit your website, they may arrive with a preconceived attitude of your company with feelings of distrust, irritation, or general dislike. This unconscious spillover effect may prevent them from purchasing from your company.

Using the spillover effect to understand your customers’ attitudes

The spillover effect is highly revealing of the mindset of your customers. You can aim to predict the potential spillover effects that your marketing campaigns could create, and so use this social theory to your advantage.

For example, the predicted effects could be utilized to govern your choice of online advertisements, the aesthetic that you attempt to establish on your social media posts, or the tone of voice that you use in your email campaigns.

The importance of the spillover effect for online marketing

One of the ways in which companies can create an intuitive marketing strategy is by aiming to create a positive spillover effect.

In your marketing, you should keep your materials in-line with the sort of impression that you believe your customers have of your company already, or that you would like them to have of you. Research your target audience, and attempt to gain evidence about how they see your company.

For instance, if you wish for your customers to view your brand as youthful, then you should aim to use modern and on-trend terminology in your social media posts. Then, if you do this successfully, your audience will bring this subconscious belief about your brand with them when they come to view your website.

Different varieties of advertising spillover effect can be used to achieve the desired perception of a brand. For example, the idea of a trendy, youthful brand can be perpetuated through the endorsement of a celebrity who appeals to young people, and is a fashionable person themselves.

The viewer of these adverts is aware that they are seeing the advertiser’s own opinion when they speak about your product. This makes their review more credible and sought-after than, for example, a headline praising your product which is featured on a retargeting advert.

Category:
To quote this article, just copy this link:
https://www.seobility.net/en/wiki/Spillover_Effect