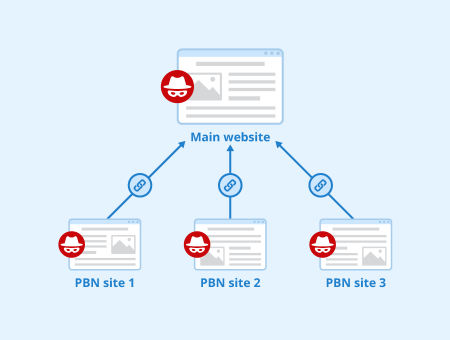 PBNs used to be very popular but they are used far less often today than they were in the early days of SEO. This is mainly due to the fact that PBNs are against search engine guidelines and are therefore classed as black hat SEO.

How are private blog networks created?

Although private blog networks can take many forms, they commonly consist of a large group of websites that are interlinked. By linking between the sites, link juice is passed between the sites, which in turn helps increase the ranking benefits that the links to the main sites provide.

In the past, PBNs were often one-page websites that offered little value to users. Their only purpose was to build a link to the main site. These days, due to search engines cracking down on manipulative link-building methods like PBNs, they can be much more complex.

Modern private blog networks commonly have multiple pages and include a lot more content than they used to. By following Google’s quality rater guidelines, PBNs are created that are almost indistinguishable from real sites.

Although this can reduce the risk of using a PBN, their use is still against search engine guidelines.

How to spot a PBN

Although modern private blog networks often look like real sites, there are a few things that can be used to identify potential PBNs, namely:

The risks of using PBNs

PBNs are against search engine guidelines, which means there’s a significant risk of a penalty if search engines find out they’re being used. They’re still a large part of black hat SEO but aren’t used as often in white hat SEO strategies.

However, similar structures are commonly created using web2.0 properties, social media accounts, and directory listings. Although still against search engine guidelines if used to directly manipulate their algorithms, interlinking online properties that a company has is considered good practice and generally doesn’t risk a penalty.

Private blog networks used to be an important part of off-page SEO before search engines started penalizing them. Today, they’re used a lot less, with their use mostly being limited to black hat SEO.

Category:
To quote this article, just copy this link:
https://www.seobility.net/en/wiki/Private_Blog_Network