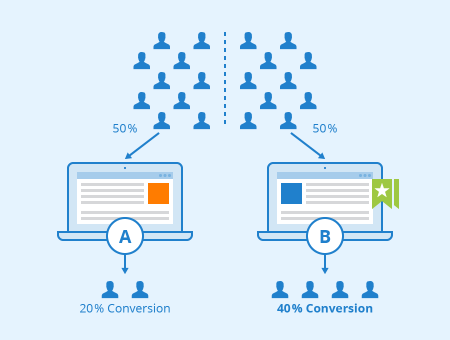 A/B tests (sometimes referred to as split tests) compare two versions of a website to determine which version is better suited to achieving a defined goal. Such a goal could be, for example, increasing conversion rates or improving other performance indicators (KPIs). An A/B test compares two website versions by randomly redirecting visitors to one of the two variants and measuring user behavior. This allows webmasters and companies to test how user behavior is affected by changing a particular variable.

The goal of A/B testing

The goal of A/B testing is to find the best possible website version to achieve a specific goal and to learn which changes can push website visitors towards a desired action.

Compared to the costs of paid traffic, the costs of increasing conversion rates through A/B testing are rather low. The return on investment of A/B testing can be very high as even small changes to a website can lead to significant increases in leads and sales generated.

How does A/B testing work?

In an A/B test, a second version of a web page is created in which a specific element is modified. This change can affect headings, buttons, images, or colors, for example. The change rarely involves a complete redesign of a page.

The next step in A/B testing is to redirect half of the visitors to the original version of the page, and the other half to the modified version. Visitor behavior is measured and analyzed on both sides. This way, you can determine whether the change had a positive, negative or no impact on visitor behavior (for example, in terms of conversion rate).

What can A/B testing be used for?

You can use an A/B test for optimizing landing pages, emails or e-commerce pages with regard to conversion rate, leads, registrations, etc. The following elements, among others, can be modified and analyzed in an A/B test:

Advantages and disadvantages of an A/B test

A/B testing is very useful for testing new ideas and determining whether they lead to results such as an improvement in conversion rate, a reduction in bounce rate, or an increase in retention time, for example. You can test possible changes on your page step by step. Thereby, you can analyze whether different colors, buttons, layouts or images influence the behavior of your visitors.

A disadvantage of A/B tests, however, is the time required to prepare and set up two different versions of a website.

In addition, for websites with little traffic, the tests may have to be carried out over several weeks or months in order to obtain a sufficiently large database for meaningful results.

A/B testing also cannot measure or indicate whether there are usability problems on a website that may be responsible for results such as a low conversion rate.

If multiple variables are changed simultaneously, there also is a risk that the test results will be misinterpreted.

The "experiments" of Google Analytics make the tool a complete A/B test platform. Users can perform split tests for up to 10 versions of a single page.

KISSmetrics is a powerful analysis platform. The KISSmetrics JavaScript library provides a feature that helps users set up their A/B test. Users can also integrate KISSmetrics into their internal test code or into another A/B test platform.

With Unbounce, you can create, publish and test responsive landing pages without HTML knowledge. Unbounce can be integrated into a variety of other tools. You also have the possibility to assign roles to team members, capture leads, and include videos, social feeds, and widgets to optimize the conversion rate of a website or email.

Optimizely is one of the most popular WYSIWYG A/B testing tools. Optimizely enables tests based on ad campaigns, geography, or cookies to facilitate the design and optimization of personalized content based on target audience segments.

Google allows and encourages webmasters to perform A/B testing. The company has stated that performing an A/B or multivariate test does not pose an inherent risk to the ranking of your website. However, it is possible that your ranking may be compromised if you use A/B test tools in the wrong way. You should, therefore, follow these tips for A/B testing:

A/B tests should not be misused for cloaking. Cloaking means that search engine crawlers are redirected to a different version of the site than users to deceive the search engine. But even if you do not have such intentions, you should not fundamentally change the content of your page. If Google notices that the variation of your page differs significantly from the original not only in design but also in scope and content, Google may misunderstand this change as cloaking and your site may be penalized. For this reason, you should never perform an A/B test longer than necessary, as Google may also perceive this as an attempt to deceive.

Furthermore, you should use canonical tags to refer to the original page if the A/B test has multiple URLs.

Setting up 302 redirects is not harmful unless they redirect to unexpected or unlinked content. 301 redirects, on the other hand, should not be used as they would signal to Google that your page has been moved permanently which does not apply to A/B testing.

Categories:
To quote this article, just copy this link:
https://www.seobility.net/en/wiki/AB_Testing