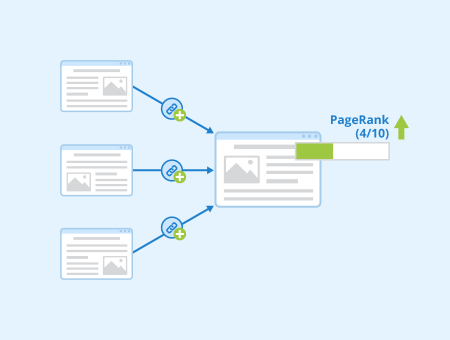 PageRank (PR) is an algorithm used by Google, that uses links pointing to pages to determine where a page should rank. This algorithm uses backlinks as recommendations by a website and these backlinks were therefore used, alongside other factors, to rank pages in the SERPs.

The history of PageRank

The idea of using backlinks as recommendations within a search engine algorithm first came about in 1998 when Larry Page and Sergey Brin invented PageRank. PageRank works by assigning a level of importance to a page between one and ten. This level of importance is determined by how many important pages link to that page, making links a big ranking factor.

In the early days of PageRank, it was made visible to the public and you could see your PageRank rising when building links to a page. This led to SEOs and webmasters placing a lot of focus on link building, often leading to black hat SEO techniques being used to manipulate rankings.

As Google began implementing various other factors, they stopped showing PR to the public. Google stated [1] that it didn’t stop using PageRank, but that it added more factors to it so that people would stop placing as much focus solely on PageRank.

Although backlinks are still an important part of SEO, other off-page SEO factors added to Google’s algorithms have somewhat reduced their effect. Over the years, the way links are used has also changed, and things like relevance, the reputation of the linking site, the content on the page, and various other factors are taken into account too.

Although PageRank is no longer made visible to the public, there is reason to believe that a form of PageRank is still used by Google. Backlinks are still an important part of off-page SEO and Google clearly stated that it continued using PageRank after removing the possibility of viewing the PageRank of websites. John Mueller has also gone on record multiple times about their use of PageRank[2]

Various online tools, including our own backlink analysis tool, provide SEOs with an indication of a webpage’s ranking power. Some tools even go as far as to provide scores similar to that of PageRank.

Although these tools can provide a good indication of your off-page SEO efforts, the database of backlinks is generally a lot smaller than that of Google. Nevertheless, these tools are popular in the SEO community as they provide supporting metrics to measure their link-building campaigns. 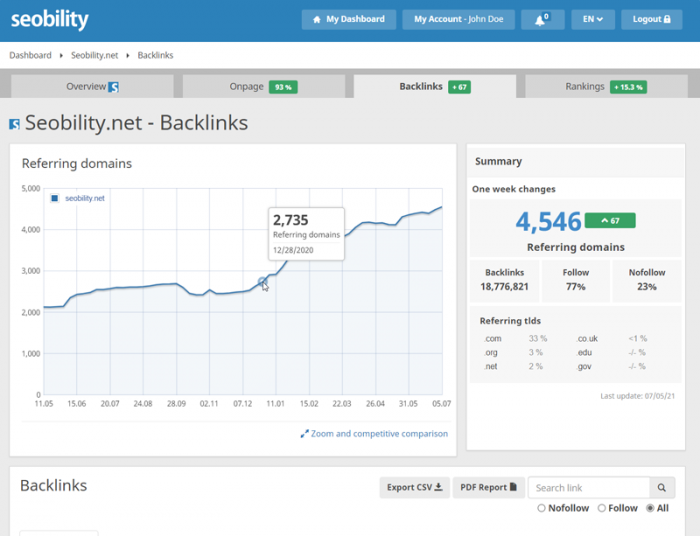 An image of our backlink analysis tool, which provides an overview of your backlinks as well as an indication of the power each link provides a page

Although the PageRank score is no longer used in SEO since it isn’t visible, the concept of links influencing the ranking power of a page is still widely agreed upon.

Category:
To quote this article, just copy this link:
https://www.seobility.net/en/wiki/PageRank