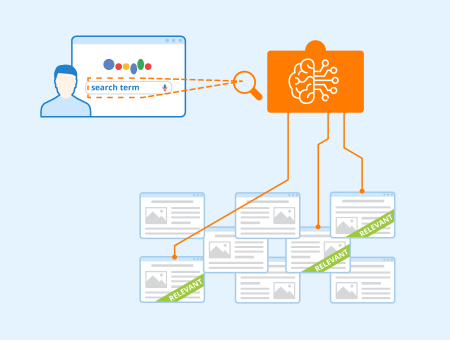 RankBrain is an algorithm based on machine learning developed by Google, which Google confirmed as part of their main search algorithm in 2015. It is thought that RankBrain uses far more factors than were previously used by Google in order to better understand the search intent of a user, as well as the meaning of search terms used.

The history of RankBrain

The RankBrain algorithm was confirmed by Google in 2015 as a part of Google’s core algorithm. This algorithm helped Google better interpret search terms as well as the search intent of users. This was the first Google algorithm that leveraged machine learning to help it understand context and meaning. It originally helped Google understand search terms it had never encountered before, before being implemented to all search queries a year later.

Prior to RankBrain, it was clear that Google used a simpler algorithm that could miss the mark when it came to words with multiple meanings, as well as searches with vague word combinations. Another important issue they were facing was the increase of long-tail keywords, which lead to the use of many search terms that had not previously been searched.

This often led to results that weren’t relevant to what the searcher was looking for, as well as potentially allowing websites to rank for terms that aren’t as relevant to a page.

Its effect on search

RankBrain had a large impact on search, both on the SERPs themselves as the way search engines worked. Given it was the first time that Google implemented machine learning directly within their core algorithm, it opened the way for future AI-driven algorithm updates.

The Google BERT update was another machine learning-based update that came a few years after RankBrain. The BERT update further improved Google’s understanding of words and the relationships between them, helping to further improve the results served to users.

The RankBrain algorithm also set the stage for more personalization, allowing for more context to be taken into account. This, in turn, has helped improve voice search as well as various other aspects of search.

RankBrain is one of the most important algorithm updates that Google has made, especially considering the continuing trend towards machine learning that it set off. It further increased the importance of writing for visitors as opposed to for search engines, as well as improving the relevance of search results and the way Google deals with words with multiple meanings and search terms it has never seen before.

User signals and website reputation gained importance when RankBrain was made public, as well as meeting search intent. This led to various changes in how SEO is done, for example, focusing more on natural content written for the user, and meeting the search intent of the keywords a site targets.

Category:
To quote this article, just copy this link:
https://www.seobility.net/en/wiki/RankBrain