Google’s Helpful Content Update: What You Need To Know 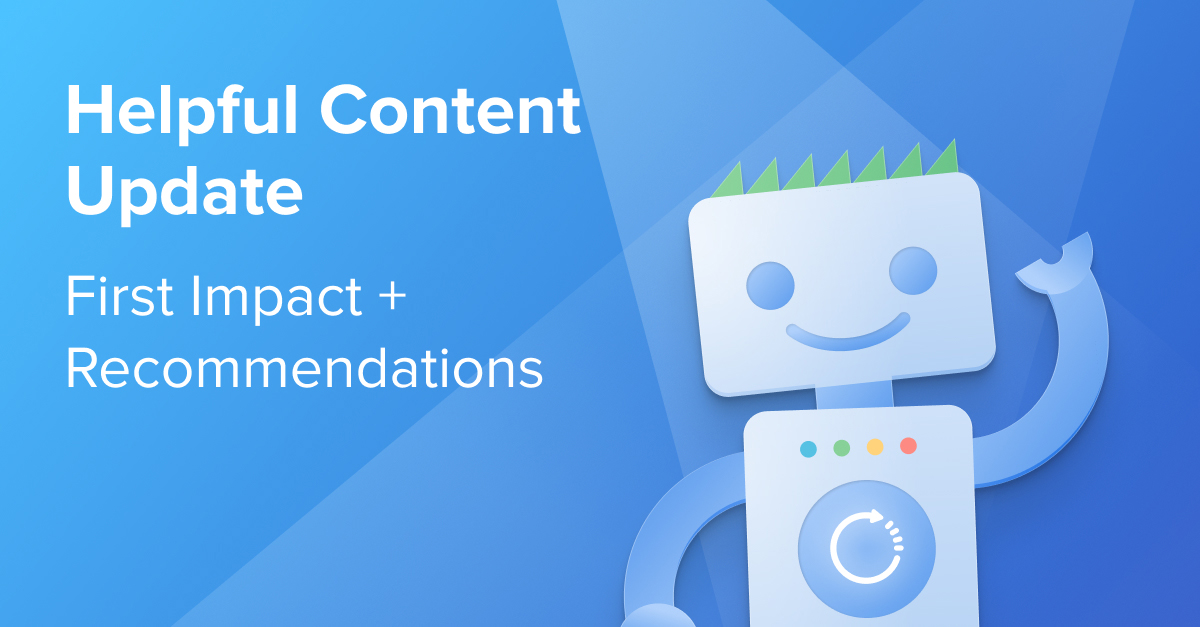 Google has recently announced and rolled out its fifth official update this year, dubbed the “Helpful Content Update” by Google itself.

The update had SEOs and webmasters all over the world glued to their screens, relentlessly refreshing their Analytics and Search Console data waiting to see if their sites would be hit.

However, most haven’t seen much change to their rankings. After two long weeks of uncertainty, the rollout was finally completed last Friday and left SEOs wondering what all the fuss was about.

That’s why, in this post, we’ll take a deeper look at this update, what is known about its impact so far and what you should do now to ensure your site continues performing optimally!

The update in a nutshell

What is the Helpful Content Update & what do we know about it so far?

Next week, we will launch the “helpful content update” to better ensure people see more original, helpful content written by people, for people, rather than content made primarily for search engine traffic. Learn more & advice creators should consider: https://t.co/fgf2TPNIqD pic.twitter.com/xOuX2iVk2d

In their recent blog post on the update, Google says that it is “part of a broader effort to ensure people see more original, helpful content written by people, for people, in search results.”

They go on to say that “The Helpful Content Update aims to better reward content where visitors feel they’ve had a satisfying experience, while content that doesn’t meet a visitor’s expectations won’t perform as well.”

It started rolling out on August 25 and was completed on September 9. Google plans on expanding the update to other languages in the future, but it only works for English searches at this point in time.

The Helpful Content Update adds a new, site-wide ranking signal to their algorithm (i.e. it impacts your complete website and not just the rankings of individual pages). This signal uses machine learning to identify content with little to no value to readers. This should, in theory, help sites with high-quality, user-friendly content and hurt sites with a lot of low-quality, search engine-first content. As expected, Google hasn’t mentioned exactly HOW the new signal determines what content is helpful/unhelpful, nor have they disclosed the expected impact.

SEO conspiracy theory on.
What if the Helpful Update, now almost at its 2 weeks of roll out, nothing was a replica of the Mobilegeddon of 2015/16? A trick by Google to push everybody cleaning the 💩 content they created along the years fearing for the flame of the Balrog? pic.twitter.com/X20pxifrZh

The new signal is weighted, meaning the more unhelpful content a site has the harder it’s hit. However, Google also mentioned that individual pieces of people-first content could still perform well on a site with a lot of unhelpful content if other signals show Google that these specific content pieces are helpful to users.

Moreover, the new signal is applied automatically, and “sites identified by this update may find the signal applied to them over a period of months.” This means that it could still take some time before the full effects are known. It also means that the impact could be gradual in some cases, making it harder to detect when a site is hit by the update.

It seems mild so far, but for the (possibly small) number of sites affected it was serious.

It sounds like it may affect more sites as the ML classifier learns what's helpful and unhelpful. https://t.co/FPUyRRpTf9

Overall, there’s still a lot of uncertainty regarding the impact it may have on the SERPs going forward.

What impact has it had so far?

The update has led to mixed reactions from SEOs and webmasters. Many SEOs haven’t seen much of an impact at all…

I've done a lot of work in the lyrics space over the past 10+ years. Lily's comment about lyrics sites had me look further into the niche, & there's actually A LOT of impact. The top players seem fine, but lower quality sites seem impacted (and a # don't have licensing rights…) https://t.co/qjieoKUeei

Another interesting finding was shared by SEO expert Lily Ray. She noticed that a few sites were negatively impacted that tried to be experts on a variety of topics (instead of focusing on one area of expertise) and didn’t provide any unique or helpful content.

This is more in line with what I was expecting to see from the Helpful Content Update:

This is a site that has a ton of 'meh' content (def. human written) about all kinds of topics – health, dating, horoscopes, celebs, product reviews, etc.

In general, however, most SEOs agree that, at least for now, the impact doesn’t seem to be as large as expected.

A recent poll posted by Aleya Solis on Twitter stated that only about 20% of SEOs noticed any ranking changes in the first week of this update.

Have any of your Websites experienced any impact from the Google Helpful Content Update so far?

However, given the fact that Google has stated that the signal can be applied over a matter of months, it’s likely still too early to tell what kind of an impact this update will have in the long run.

Google has also stated that “Over the coming months, we will also continue refining how the classifier detects unhelpful content and launch further efforts to better reward people-first content.”

On top of that, Google’s Danny Sullivan has also repeatedly stated on Twitter that this update is an ongoing thing.

With the helpful content update, it's as we've said, an ongoing thing. If you launch some new site full of unhelpful content, it might spot that soon after launch, and the site might not see a change in traffic because it never really gains….

So, even though the update seems like a minor one at the moment, it’s worth keeping an eye on your rankings over the next few months. But keep in mind that any ranking fluctuations in the near future don’t necessarily have to be related to this update.

With all this uncertainty, you’re probably wondering what to do now in order to keep your website rankings on track.

What should SEOs do now?

In its official blog post, Google also mentions multiple times to remove unhelpful content from your site. But how do you know which content is “unhelpful”?

Google provides a number of questions you can ask yourself to make sure you’re not taking a search engine-first approach:

As well as a number of questions that can help you judge whether your content is considered helpful or not:

Whether or not you should follow Google’s recommendation and outright remove content will depend on the situation. Before deleting content, always take into account a page’s traffic before and after the update and whether or not it can be edited.

You may find that making a few small changes or editing the page to be more helpful is all you need to do.

That being said, if you feel like you’ve been negatively affected by this update, it’s definitely worth going through the questions provided and checking whether your content follows Google’s guidelines to see what changes are worth making.

“Our advice about having a people-first approach does not invalidate following SEO best practices, such as those covered in Google’s own SEO guide. SEO is a helpful activity when it’s applied to people-first content. However, content created primarily for search engine traffic is strongly correlated with content that searchers find unsatisfying.”

This means that SEO best practices still remain an integral part of a successful website (as long as they are applied to the right type of content) and therefore shouldn’t be ignored.

The purpose this update serves isn’t anything new. Google has been trying to crack down on low-quality content ever since the Panda update in 2011, and there’s no reason to expect this to change any time soon.

If you want your site to continue performing well in the SERPs, here’s a summary of the most important do’s and don’ts:

If you follow these do’s and don’ts and continue creating high-quality content, you shouldn’t have to worry about your rankings being impacted by this update anytime soon. Who knows: you might even see them tick up in the near future!