Today we have some big news for you: On Tuesday, Google announced on its Webmaster Central Blog that it will treat nofollow link attributes only as a hint and not as a directive in the future. In addition, two new link attributes “sponsored” and “ugc” were introduced. How will this impact your website and which adjustments should you make now? Keep reading to find out. 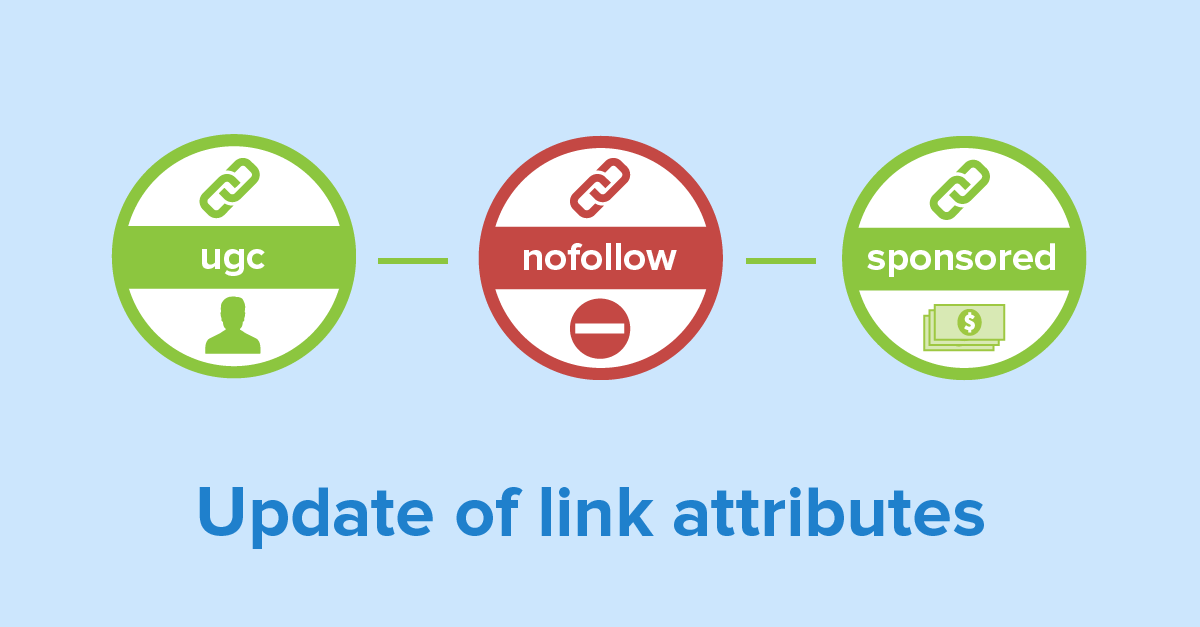 In 2005, Google introduced the nofollow attribute for links that Googlebot is not supposed to follow. Now, this attribute has been fundamentally changed for the first time: in the future, Google will no longer treat nofollow as a directive but rather as a hint. Until now, nofollow links have been strictly ignored by Googlebot but with this change, they could possibly be considered for ranking purposes.

In addition, there will be two new link attributes, namely “sponsored” and “ugc”, which will complement the nofollow attribute. These are also treated as a hint by Google and should be used in the following cases:

rel=”nofollow” should still be used for links if you do not want to endorse or recommend the linked page, i.e. you don’t want to pass on link juice.

According to Google, you can also use multiple attributes for a single link. For example, you could use rel=”nofollow ugc” for links in the comment section of your blog that you don’t want to endorse. You can find an infographic that summarizes the different use cases on moz.com.

What is the reason for this change?

You wonder why Google made this change? Google explains in the official announcement that they no longer want to ignore nofollow links, as the analysis of such links can help, for example, to uncover unnatural link patterns. By taking nofollow links into account, they can make sure that such important information won’t go undetected. At the same time, you still have the possibility to signal to Google that certain links should be given less weight. With the two new link attributes “sponsored” and “ugc”, you can also help Google better understand the different types of external links you set.

The announcement that nofollow will only be treated as a hint for ranking purposes gave rise to fears that this could lead to an increase in link spam, for example in comment sections. However, Google doesn’t expect this to happen as most blogs and similar platforms already have ways to detect spam (e.g. moderation tools for comments).

In addition, Google points out that treating nofollow as a hint will in most cases have no impact on rankings. Google, therefore, does not expect the change to have any significant effect on search results. It’s just a means to help Google better process links when searching the web.

If you’re afraid that you now have to change all nofollow links on your site, we recommend you to stay calm. Google explicitly stated that this is not necessary as nofollow will still be supported. For the future, Google recommends to use “sponsored” and “ugc” but there are neither advantages to using the new attributes nor disadvantages if you don’t. That’s why many SEOs are skeptical about the change, as it seems to primarily benefit Google. Webmasters now just have more possibilities to inform Google about what kind of link they set.

However, Google also announced that from March 1, 2020, nofollow will only be treated as a hint for crawling and indexing purposes as well. So if you use nofollow for internal links on your website in order to prevent certain pages from being crawled and indexed, you should switch to another method (e.g. robots.txt or meta tags). You can find more information on how to lead Googlebot through your website in our article on crawl budget optimization.

I’ve been anticipating such declaration since a long time. Now a days, so called buying, selling, or exchanging spam backlinks in the market should be focused on.

Interesting news from Google, thank you for posting it.

Thanks for this explanation on what Google has come up with on “no follow” and two new features “sponsored” and “ugc” for understanding the link very well.

Here, we thank you wholeheartedly for such good and very simple explanation of this new development of Google.

Thank you for sharing

With this new link attributes from Google, one can easily identify traffic/leads coming from user-generated content and sponsored content.

I wonder what Google will do if sponsored links are not attributed correctly?

Don’t worry, Google won’t punish websites that don’t use the new link attributes appropriately ? It’s recommended to use them, but not mandatory.

Thanks for this informative post. Glad I found it!

thanks for the news. What do you think will be the impact on the crawling budget of a page?

Hi Patrick,
the new link attributes mostly affect outgoing links, so your website’s crawling budget shouldn’t be affected by that at the moment. But you should consider switching from internal “nofollow” links to robots.txt blocks if you want to prevent Googlebot from crawling certain pages. Google will treat nofollow only as a hint for crawling and indexing as of March 1, 2020.

Can you explain what happed thoes links that was aleady creat. It was helpful in ranking or not?

Hey Mani, Google didn’t consider nofollow links for ranking purposes in the past. However, they were (and still are) important for a natural backlink profile. You can read more about that in our article on link building: https://www.seobility.net/en/blog/link-building-tactics-how-to-build-sustainable-backlinks/#Nofollow-%20and%20Dofollow-Backlinks
Hope this helps ?

Thanks for updating every time google adds something new then we need to update our knowledge as well as our content.

Thanks a lot for this informative post. I think all readers will be benefited by going through the post.

Thank you for this tip on what has come over “no follow” and the two new attributes “sponsored” and “ugc” to make Google understand links very well…..

Thanks for informative post about google changes. It sounds kind of “anti-blackhat” in my opinion. But nothing to worry as long as I Will not be using paid links. If I would use, it would be sort of whitehat guest blogging or something else. However, thanks for the info!

So for now, nothing to change but maybe in the future? Keeping up with SEO sure is a lot of work, lol.

Its not as easy as this, it depends on your site and outgoing links.
You can update your link attributes with ugc or sponsored, also in combination with nofollow. And you should be aware, that Google will treat nofollow not as a restriction any more.

Thank you for this tip on what has come over “no follow” and the two new attributes “sponsored” and “ugc” to make Google understand links very well…..

I have been hearing about the new development but couldn’t understand the gist.

Most of the documents that I have came across weren’t explanatory.

Here, you give a good analysis and straightforward hint.

Hey Lawal, thanks for your kind comment! We’re glad we could help you ?