A Content Delivery Network (CDN) is a network of servers distributed across many geographic locations worldwide. The server locations are referred to as "Points of Presence", abbreviated PoP. These servers act as reverse proxy caches for web pages. When a user visits a website, his request is sent to the nearest CDN-PoP. The PoP either returns the requested website component from its cache or retrieves it from the server where the website is hosted (origin server).

CDN servers can cache HTML pages, JavaScript files, stylesheets, images, videos, and other static website content that does not require reloading every time a page is accessed. Because CDN PoPs are geographically distributed, they are often closer to users than the origin server of a website. This means that users can request a website more quickly and receive a response faster. Today, most web traffic is served by CDNs, including those from major web sites such as Facebook, Netflix, and Amazon 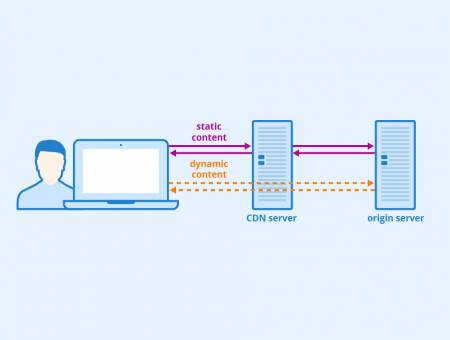 A Content Delivery Network generally consists of five components. These include:

The benefits of using a CDN may vary depending on the size and requirements of an internet property. In general, a CDN shortens loading times by distributing content across multiple servers. The globally distributed nature of a CDN reduces the distance between users and website resources. Instead of having to connect to the origin server of a web site, users can use a CDN to connect to a geographically closer data center. Because visitors tend to leave a slow page quickly, a CDN can reduce bounce rates and increase the time users spend on your website. Both metrics are important signals for Google and can thus influence your ranking in organic search results.

Through caching and other optimizations, CDNs can reduce the amount of data that an origin server must provide, significantly reducing its load. Smaller file transfers also mean faster loading times and reduce broadband usage costs.

Besides, using a CDN increases the availability and redundancy of content. For example, a CDN is more resistant to website interruptions, for example, due to high traffic. Load balancing distributes network traffic evenly across multiple servers, making scaling easier when traffic increases rapidly. Intelligent failover provides uninterrupted service even if one or more CDN servers go offline due to hardware malfunctions. Failover allows traffic to be distributed to the other servers.

In the event that an entire data center has technical problems, most CDNs use the Anycast routing method. It transfers traffic to another available data center to ensure that no users lose access to the site. Anycast is an addressing and routing method where a single destination address is assigned to a group of computers. The routers select the desired path based on the number of jumps, distance, lowest cost, latency, or least used route. A positive side effect is that a website is indexed internationally because of the anycast IP.

Last but not least, a content delivery network reduces the risk of DDoS attacks. A DDoS (Distributed Denial of Service) attack is a form of cybercrime aimed at flooding a server with requests to trigger a system failure. DDoS attacks can not only cause large economic losses but can also have a serious impact on a company's reputation and image. The CDN intercepts these attacks before they can reach the origin server, keeping the site up and running.

Although there may be an unlimited number of pages associated with particular CDN content, that content is not considered duplicate content. CDNs use canonical headers to refer search engines to the original content on the origin servers.

Category:
To quote this article, just copy this link:
https://www.seobility.net/en/wiki/Content_Delivery_Network_(CDN)