Google’s Passage Ranking Update: What You Need To Know 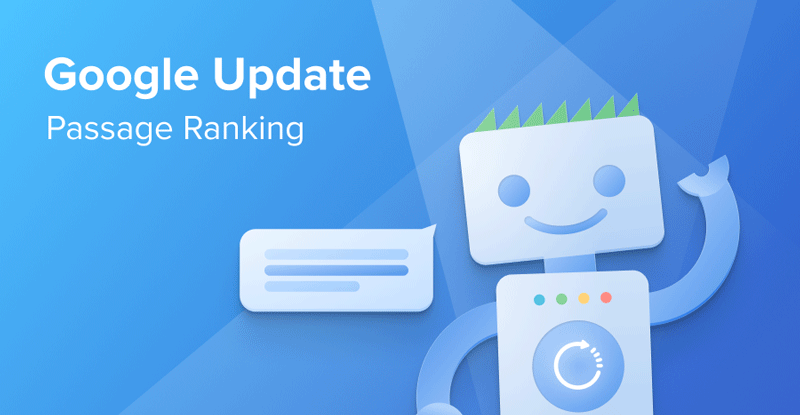 In its October 2020 announcement of the new feature, Google highlighted how Passage Ranking can help surface answers to highly specific search queries.

“Very specific searches can be the hardest to get right, since sometimes the single sentence that answers your question might be buried deep in a web page. We’ve recently made a breakthrough in ranking and are now able to not just index web pages, but individual passages from the pages. By better understanding the relevancy of specific passages, not just the overall page, we can find that needle-in-a-haystack information you’re looking for.”

In this article, we’ll look at what passage ranking is, how it will impact your rankings, and what steps you can take to make sure you’re ready for the change.

What is Passage Ranking, anyway?

Passage Ranking is a new ranking factor aimed at better understanding pages that address a variety of topics.

Last week, we shared about how we will soon identify individual passages of a web page to better understand how relevant a page is to a search. This will be a global change improving 7% of queries:https://t.co/iQoXktmSkt

In this thread, more about how it works…. pic.twitter.com/2oqdoCkt6r

With our new technology, we’ll be able to better identify and understand key passages on a web page. This will help us surface content that might otherwise not be seen as relevant when considering a page only as a whole….

In other words, before Passage Ranking, Google evaluated the topic of the page as a whole, reducing the likelihood that these individual passages could appear in search.

Now, Google is identifying passages and even single sentences buried deep within webpages that are highly relevant to search queries.

How does Passage Ranking work?

Before the rollout of Passage Ranking, Google analyzed the content of a webpage as a whole.

Here is an example:

Let’s assume a website had one single, in-depth page with instructions for making different varieties of coffee: cappuccino, cortado, espresso, flat white, cold brew, and mochaccino – all recipes on one page. Google would have concluded that this page is on the general topic of “coffee recipes.”

Compare that with another site that has multiple pages with instructions for each type of coffee drink. Google would decide that the site has content on specific topics like “cappuccino recipe,” “cortado recipe”, and so on. Those pages would have had an edge in Google’s SERPs, because the above mentioned competitor page on “coffee recipes” in general would appear less specific and focused by comparison.

Passage Ranking levels the playing field. With Passage Ranking, Google can analyze the longer page and see that it covers several specific topics. As a result, sections of longer pages with highly relevant information can now rank higher in search.

Who will be affected by Passage Ranking?

According to Google’s Martin Splitt, Passage Ranking is intended primarily to help content creators who aren’t using SEO-focused best practices. If you are, you likely won’t be affected. Google improved their ability to identitify and rank relevant passages that would otherwise be lost in not so well structured, long-winded pages.

“We are only improving rankings for pages that are currently having trouble. If you have good, relevant, well-structured content, I would be surprised if a random passage on a really long page is magically so good that it outranks you.”

What should content marketers do differently in response to Passage Ranking?

Nothing, says Splitt. “That’s a change that is pretty much purely internal and there is nothing that you need to do. It’s just us getting better at more granularly understanding the content of a page, and being able to score different parts of a page independently.”

But is there really no implication for us SEO’s?

We think there is.

Going the extra mile of creating very deep and thorough content did sometimes not bear fruits for content creators. Why? Because Google had a hard time of matching very specific search queries to the depths of your content. Google just couldn’t identify the little passages that fit so well.

This changed! Google became better and can now identify and rank passages, so we can assume that providing very detailed content could now lead to even more visitors.

How is Passage Ranking different from Featured Snippets?

Passage Ranking doesn’t cause passages to be displayed as snippets — it’s simply a better way to understand everything a piece of content contains.

Passage ranking isn't about display. It doesn't cause snippets to somehow get longer. It's about better understanding what a page is about by understanding the context of passages of text, where they can be identified, in *addition* to other ranking factors.

Splitt confirms that featured snippets and passage ranking are completely separate systems. Featured snippets display instant answers to questions that can be answered in just a few sentences. Passage ranking, on the other hand, will appear as a typical blue link search result to a specific passage within a piece of content — and won’t necessarily be limited to quick, concise answers.

Will there be a jump anchor for Passages, like with Featured Snippets?

Jump anchors are a feature in Chrome that allows a URL to be configured so that Chrome jumps straight to a relevant passage and highlights it in yellow when the link is clicked. Early indications suggest that many passage links include scroll to text features, so don’t be surprised if you see them popping up in your Search Console:

With #PassageRanking having launched yesterday, I noticed an interesting increase in URLs containing "#:~:text=" for English queries in the US. No clicks so far + can't find a live example in the SERPs b/c seems to be used only on a small fraction of searches (yet). Exciting 🙂 pic.twitter.com/dQIIt85fsl

For more on Passage Ranking, check out this conversation with Google’s Martin Splitt:

15 thoughts on “Google’s Passage Ranking Update: What You Need To Know”

[…] In fact, that concept of page division (through headlines) is the basis of the recent big Google passage rankings update. […]

It was a great read. Most of my webpages are long and contain detailed content, hopefully, this update will somehow help in rankings. Also, update us with the worldwide release of passage ranking update.

Thank you, Pankaj! We’ll let you know when Google rolls out the change in other countries.

I am afraid to hear this latest update. Because most of the articles on my blog are only 400 – 500 words.

If you’re already providing high-quality and relevant content on your website, this update is nothing you should worry about. But depending on the topics you cover, 400-500 words might not be enough to provide the in-depth information that Google deems to be required for many searches. So, you should rather check if your content meets Google’s basic quality standards. You can find more guidance on how to provide this kind of content here: https://www.seobility.net/en/blog/eat/.

Thanks! Do you guys know when google plans to roll-out these changes world-wide?

No, Google didn’t provide any further details on this. But we’ll keep you posted 🙂

Read the full article, and it’s interesting topic. I have a blog with many long article, hopefully this update will able to rise some of my topic to the surface.

Hi Andy, hopefully you will be able to profit from this update! 🙂 But don’t forget that you shouldn’t rely on Passage Ranking to do the work for you but instead continue to optimize the content on your website.

Thank you for the timely and useful information.

Google always finds a way to make their services relevant, and to us web owners, on our toes to keep with their update and provide relevant information. Thanks for SEOBILITY we get to know this information first hand and go with the flow.

Thanks for your comment! We’ll do our best to keep you up-to-date on the most important changes to Google’s algorithm in the future too 🙂

i think thats will be more easy and good 🙂

We also believe that this brings new chances for content creators 🙂